In pursuit of truthful history stories 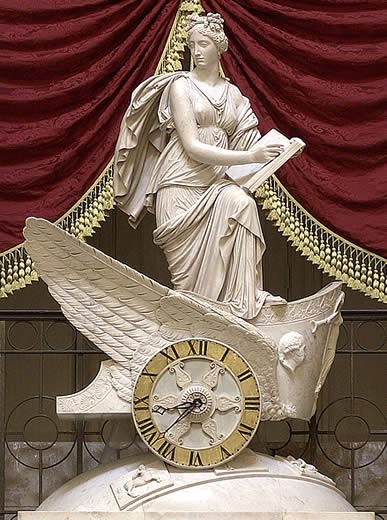 Clio, the muse of history. Carlo Franzoni (1819). Chariot clock in the National Statuary Hall, the old house chamber of the U.S. Capitol. Symbolically, Clio is recording the proceedings of the house.

Cambridge Modern History, 1902: ‘Great additions have of late been made to our knowledge of the past; the long conspiracy against the revelation of truth has gradually given way; and competing historians all over the civilised world have been zealous to take advantage of the change.’

Richard J. Evans, 1997: ‘History is an empirical discipline, and it is concerned with the content of knowledge rather than its nature. Through the sources we use, and the methods with which we handle them, we can, if we are very careful and thorough, approach a reconstruction of past reality that may be partial and provisional, and certainly will not be objective, but is nevertheless true. We know, of course, that we will be guided in selecting materials for the stories we tell, and in the way we put these materials together and interpret them, by literary models, by social science theories, by moral and political beliefs, by an aesthetic sense, even by our own unconscious assumptions and desires. It is an illusion to believe otherwise. But the stories we tell will be true stories, even if the truth they tell is our own, and even if other people can and will tell them differently. Anyone who thinks that the truth about the past does not matter has not, perhaps, lived under a regime like that of the Soviet or Eastern bloc Communists where it is systematically distorted and suppressed.'

Historia means - in ancient Greek - learning through research, narration of what is learned. The histor  is the one who knows, the expert, the judge.Traditionally, history is an evidence-based practice and the results of historical research are laid down in a narrative account. Nowadays a synthesis of solid research is published in a history book on a special subject or a biography (on a well-known or less well-known historical person) situated in a broader historical context. Sometimes even literary writing styles are used. This has not always been a matter-of-course.

The academic approach of historical research is based on a simple assumption, the foundation of modern science: the dialectic approach. It is summarized in the Encyclopedia of Sciences and Religions. ‘A dialectic method of historical and philosophical progress that postulates (1) a beginning proposition called a thesis, (2) a negation of that thesis called the antithesis, and (3) a synthesis whereby the two conflicting ideas are reconciled to form a new proposition. Although this method is commonly referred to as the Hegelian dialectic, Hegel actually attributed the terminology to Immanuel Kant. (….)’

The consequence of this dialectic approach for historical, evidence-based research:  the historian is obliged to start all over again if he or she discovers, during research, that the provisional construction is wrong. The design of a provisional construction (based on found evidence in the primary sources or books written by other historians), a deconstruction and the formulation of a (new) (re)construction thesis are always closely entangled in the practice of the historian before he or she is able to write down the synthesis of research. Some historians never reach the stage of synthesis. They just publish their finds and some considerations.

To publish considerations instead of a synthesis of research in a well-written narrative: sometimes it is the result of a civil war among academic historians. During a “historiographical discourse” in the 20 th century, some groups of academic historians tried to bring the conventional craft of historians closer to the social and natural sciences. The “philosophers of history” tried to find new directions in the study of history. The result was damaging for the full practice of historical research. One of the main items of discussion was: is the historian able to discover the “truth” in history? As the answer was no, some historians claimed it was useless to research the past at all. So, a lot of conventional working historians decided to publish academic considerations containing their provisional results of research.

Also another civil war among academic historians made a lot of casualties: during centuries history is used and abused for individual, dynastic and political reasons. By denying the historical truth some critical philosophers of history were helping those who have their own reasons to obstruct the examination of the historical facts by a critical, academically skilled historian.

So, the discussion among historians is closely linked to the present discussion on the "post-truth world". The attitude of a small group of historians opened the gates to (further) manipulation.

There are even more casualties of war. Within the liberal democracies of the modern world the historians have traditionally important duties and social obligations: to educate critical citizens in possession of the vote and  to deliver reliable information which is to be used for important social and political debates. Within the Anglo-American world citizens even have an important duty to serve in the jurisdiction (as member of a jury). Historians are important players within education trainings which the Germans describes as Bildung: a critical education which creates citizens in possession of both a personal and cultural maturation which are able to identify themselves with the broader society.

The philosophers of history undermined the liberal, democratic foundations of the western world. History disappeared from the educational curriculum at schools. A lot of people from the younger generations received their rights of vote while becoming an adult, but were only superficially educated in history and therefore don’t understand fully the “why” of their political and social duties.

Some of the comments by philosophers of history made sense. The conventional working historians had to defend themselves. Their arsenal is sometimes out of date, but the outcome of the debate isn’t. The conventional working historians were obliged to rethink and refine their skills in relation to working with sources. A selection of quotations of some important voices within this debate reveals a lot about the methods and skills of the contemporary historian. In the post-war period a lot of historians, trained at university, became journalist or politician after graduating. That process is enduring. The former British Prime Minister Gordon Brown (Labour Party) even earned a PhD in history. The historiographical discussion was therefore far from harmless: the professors in history like to train their successors, but most certificated historians are looking for a job outside the university system.

The training in critical thinking during a history education is nowadays more important than the search for historical facts in the archives, but the training in the skills and methods of the academic historian is still important because they are also useful in the analysis of the “facts” spread by internet. For several reasons therefore, Irène Diependaal has collected some important voices of expert historians participating in the discussion about the “end of history”. The selection starts with quotations from a book by Richard J. Evans, In Defence of History. It was a controversial book in 1997 because the historiographical discussion was still going on, but nowadays it is a classic. Afterwards, the selection follows the chronology. “The end of history”-phase has two meanings. Evans was primarily referring to a historiographical debate, but this debate became closely connected  with a second, more culturally orientated debate. The second debate became powerful in the international press and overshadowed the historiographical debate. The selection is therefore closed with an article from the Washington Post. An editor interviewed Francis Fukyama, the inventor of the second interpretation. Both discussions are mainly closed by the participants, but the legacy is very much alive.

There are no references to pages to be found in this section. This section of Hereditas Historiae is meant for general readers.* It is a supplement on newspaper titles which want to make a distinction between the reporting of (checked) facts and opinions. Because it has mainly been a discussion by historians within academic circles: a lot of the general readers probably did miss something important.