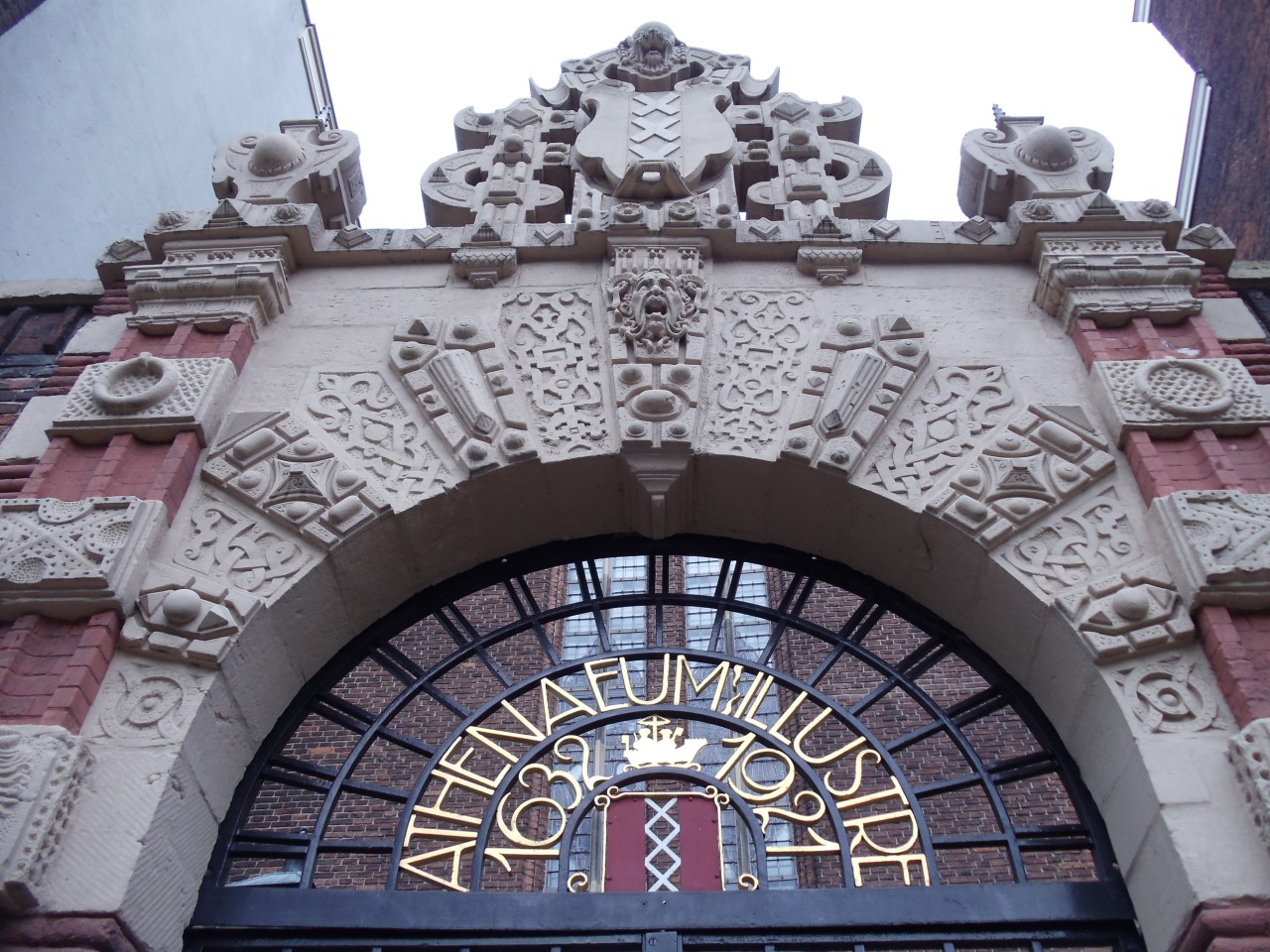 In olden times, academics in the Netherlands graduated as “doctorandus”. Their title, “drs”, simply meant: “to become a doctor”. In the period after the Second World War, most people didn’t progress that far. “Doctorandus” became the final stage of the average higher education, more or less similar to the level of the Anglo-American “Masters”. So, as a “doctorandus”, a graduate was free to go in the world and to use the gained educational capital for personal or general merits. Graduates with extraordinary intellectual gifts or the wish to one day become a university lecturer continued their studies to become a “doctor”. While the research doctorates for nature studies became part of a scheduled education programme and most students graduated at an early age, the procedure to become a doctor in History became difficult to pass through after the Second World War. Individual, empirical research became part of the conditions needed to become a “doctor”. Historians on the brink of “becoming a doctor” didn’t just simply have to write a thesis, they also had to write a book worthy enough to be published containing the fresh empirical facts they had uncovered. After 1968, the social sciences did have their influences in Dutch academic history. Postgraduates not only had to complete empirical research on their own, but, in the left-wing atmosphere which became dominant in Dutch universities, they also had to embrace an academic school influenced by social science and give a contribution to social or philosophical theories. Most prominent schools - for example the French Annales, the German Frankfurter Schule or the British Past & Present-school - were heavily coloured by political ideology. Certainly before the fall of the Berlin Wall the neo-marxist views had a powerful influence on Dutch universities. In practice, postgraduate historians therefore had to embrace an influential school, or had to counter fact a theory by presenting new facts or developing a new theory of their own.*  It mainly had to do with rivalry among university teachers: “to become a doctor” became similar to showing the aspiration “to become a professor”. In The Netherlands a “professor” is not only the highly situated lecturer at an university, but also an university official with management responsibilities and is therefore allowed to wear ceremonial robes. All candidates to become a doctor has to go through an official ceremony: to defend his or her thesis to a committee of professors who are dressed in ceremonial robes. During this ceremony, the newly created doctor becomes a “peer” of the professors in the intellectual sense. However, without an official appointment as professor at an university, even if the person in question is a lecturer at an university, the new “doctor” is not authorized to wear the ceremonial cloths of a professor during university ceremonies or to accompany postgraduate students in their process to get a PhD. To recommend a PhD-student to become a doctor: it is a privilege granted to university professors. As a result of this historical grown procedure, the professors are holding a ballot to vote for someone’s admission to become a doctor. Indirectly, the committee of professors -  who are assembling during the ceremonial defence of the candidate to become a doctor - are deciding who is to becoming a future colleague of them as a professor at an university.

So, in the late 20 th century it became difficult to become an intellectual “peer” of the professors in History. Eventually, it came to be expected that a postgraduate historian would write his or her magnus opus or to write a thesis on the level of the German Habilitationsschrift in order to gain entrance into the pomp and circumstance of the academic community. As a result, in the 1980s and 1990s no postgraduate historian with common sense wanted to write a historical thesis after the graduating as a “doctorandus”, unless he or she aimed to have a career as an university based lecturer or wanted to be recognized within a social elite group as an extraordinarily intellectually gifted person. One of these two aims singled out ones chances in obtaining a job within business life or the civil service enormously, so it was best to wait until early retirement to write a historical thesis or to remain very pure in one’s intellectual ambitions while combining working life with writing a historical thesis.

As a result of the clash of several changes within the Dutch education system and international cooperation within the European Community (the Bologna process), the training for future university teachers and university based researchers was brought back to the level of the Anglo-American PhD-level, while the external doctoral research candidates in humanity studies were still assisted in the idea of the old system. The mainly German intellectual orientation of the Dutch academic history therefore produced several kind of “doctors”, but they all have to face a prejudice coming from the olden times, when an university was initially an “academy” and only secondly an institution to attain further education: a historian isn’t taken seriously if he or she still at the level of “becoming a doctor”.

Because of the rigid restrictions held by the professors and the politically coloured atmosphere at Dutch universities in the late 20th century, it became difficult to study the constitutional monarchy or royal biography. The conditions needed to gain entry to primary sources within confidential archive materials became very difficult because persons were not trusted. It was like a political outmanoeuvred politician such as Jeremy Corbyn asking permission to research the life of Queen Elizabeth II or to publish a biography of a King or Queen still alive: every historian was treated with suspicion. Historians were not welcome in royal circles because most of their supervising professors, who had to act as “promotors” or a member of the “promotion committee”, held openly political ideological views. Only a very select group of historians, mostly already doctors or professors, who had expressed their conservative political views in print elsewhere, were welcome. Therefore, it became very challenging in The Netherlands for a “non-doctor” to achieve the first condition in order to obtain a research doctorate: the possibility to research primary sources. Even professors with an excellent publication record were refused to carry out research with primary sources or even were not allowed to check the published empirical facts of their colleagues. They often didn’t receive a written letter with explanations. Instead, they heard from others that the refusal was because they had published a statement the Dutch Queen or her staff didn’t like. Of course, gossip and slander thrived within this cold climate. In these academic circumstances it became difficult, nearly impossible, to combine research in primary sources with the condition the small circle of Dutch professors in History demanded before a postgraduate historian was welcomed “to become one of them”: a contribution to social science.

So, only after my graduation as a doctor I was asked to write essay reviews to adjudge a book of academic peers and to combine it with some academic research of my own; a mini-research project including presenting some new academic views on the subject or to write an essay review which required an investigation of the published facts. Some recent work can be found in this section. Everything is published in the original language (Dutch or English). 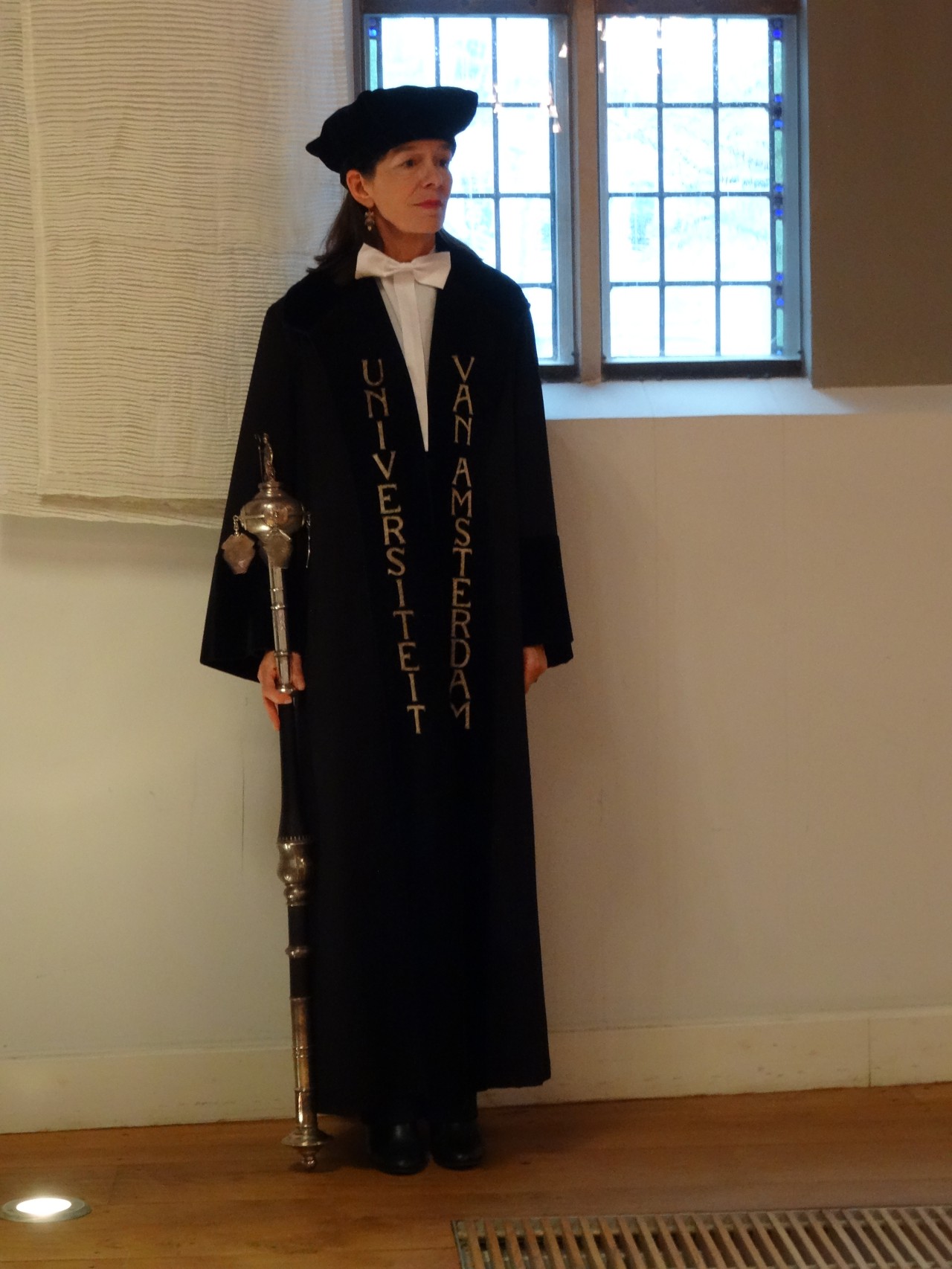 The Registrar of the University of Amsterdam, dressed in ceremonial cloths, on 5 November 2013 in the "Agnieten gate". Private photograph.

*  Some more information about the influential schools within the study of history is to be found in professional textbooks listed in the section "History & Historiography".