‘Before we can decide how to create arguments which will justify historical knowledge, we need a clear idea of what it is we are trying to justify. The traditional answer is that historians want to justify the claim that their descriptions of the past are true. Fine, but what is meant by “true”?

This has become a very difficult question to answer. Indeed some have decided we simply cannot know whether our descriptions of the world are true, and we should give up pretending that we can. Postmodern critics consider methods of historical inquiry and argument to be traditional practices which cannot yield truths about the past and so might as well be abandoned. They urge us to admit that traditional beliefs about the truth of history cannot be justified. (…)

In this chapter I will state, as briefly and clearly as I can, the traditional reasons for thinking we can discover truths about the past, and then the objections to that traditional view which render it no longer acceptable. But rather than becoming sceptical of historical knowledge, I prefer to build upon the insights of postmodern critics to create a more sophisticated theory of historical knowledge and historical truth. With this theory, although no knowledge of the world is infallible, it is often reasonable to believe many descriptions of the past are true. (….)’

‘Those who teach history in schools and universities often value the subject for providing training in critical thinking. They teach students critical interpretation of evidence, and critical assessment of interpretations and explanations. They hope that the skills students acquire by studying history will be useful in other contexts. Such teachers will, I hope, welcome this book as it introduces readers to the forms of argument found in the discipline of history.’

These questions force us to consider the social value of professional history. There are three social functions of history which require that history be as rational as possible. The first is that history establishes the identity of social groups, institutions and nations. It describes the character of instances of these by studying how they have behaved in the past. In so doing, it draws attention to characteristics which people identify with those particular groups, institutions or nations, to which they respond with approval or hostility. In war, politicians generally denigrate the enemy, to encourage hatred and justify killing. Historians have a vital responsibility to ensure that the accounts they give of groups, institutions and nations are as accurate and fair as they can make them, so that responses to them can be just.

A second valuable contribution history makes to present society is that it identifies trends at work that can enhance or diminish its quality of life. The globalization of liberal capitalism has had good and bad effects which are likely to continue, and the bad ones, which range from the exploitation of cheap labour to the loss of many community values and services, need to be addressed. Another trend of recent concern has been the exploitation and degradation of the environment, with dramatic effects upon the world's climate and the loss of natural species. More recent trends involve difficult relations between Muslim and Christian communities; and a worrying disregard for international law. Historians must report these trends accurately, if we are to respond to them appropriately.

Finally, history has many lessons to teach us about the value or disvalue of the beliefs and practices, traditions and institutions which we have inherited, enabling us to see the value of those worth preserving and the need to change those which are not. History is also a rich field for the discovery of causes of historical change, of wars and revolutions, of economic prosperity and depression, which inform many of our political and economic judgements. Once again, we will act foolishly if the historical basis of our decisions is not as accurate as possible.

Historians as a profession have a social responsibility to protect the community from false and biased propaganda. Individual historians will have their own personal biases no doubt, but the profession has standards of rational justification, set out above, which can be applied to correct most personal biases. Culture-wide biases are harder to rectify: we must rely upon people from other cultures to help us detect those. (…)

There are other benefits which history can provide, but these are personal rather than social. In describing the fortunes of great and ordinary people in the past, and of their projects and communities, historians help us understand the variety of ways in which peoples’ lives can unfold, which is a source of personal wisdom. By describing the struggles of a person’s own family, group or community, how they have reached the point they are currently at, history can foster a sense of corporate identity, an ability to see one’s own life as part of that of a greater social whole. And finally, history can be very entertaining, as it describes how people overcame difficulties in achieving their goals, or were finally defeated by them. Fiction can provide entertainment as well as history, but it cannot yield wisdom and a sense of corporate identity nearly as convincingly.

To fulfil these social and personal functions responsibly, history should be credible, intelligible and fair. Historians should ensure that their descriptions of the past are well supported by evidence, so that they are entirely credible. One cannot prove descriptions of the past that are absolutely true, but one can have so much evidence in support of them that it is quite reasonable to believe them true. When historians explain significant events, they should do so accurately and comprehensively. The causes they identify must actually have influenced the outcome, and no important causes should be ignored. Otherwise readers will not properly understand how such outcomes are produced. Finally, descriptions, explanations and interpretations must be fair, not omitting features of a subject or process so as to give a misleading impression of its nature. In judging the value of people, policies and institutions, people need to know their good points and their bad points alike. A partial, one-sided account will produce a mistaken idea of their value.

Given the importance of providing credible, intelligible and fair history, it is incumbent upon serious students of history to know how they should justify their conclusions.’

All quotations are taken from: C. Behan McCullagh, The Logic of History. Putting postmodernism in perspective (London & New York 2004).

Christopher Behan McCullagh is a philosopher of history.

From C. Behan McCullagh’s official website (cbehammccullagh.com): ‘I have lectured History at the University of Melbourne, and Philosophy at La Trobe University, Melbourne. I recently retired as a Reader and Associate Professor of Philosophy. I am currently an Honorary Associate at La Trobe University Philosophy Program. I welcome comments, corrections and suggestions on my work which might improve it. (…) Having published a lot on the nature of historical knowledge and historical understanding, I am currently researching the value of historical knowledge today (…) My second field of inquiry is more personal. I have spent many years considering standard Christian beliefs, trying to decide which are credible. I have published a few papers on this subject, but here present short reflections on particular issues. I measure Christian beliefs against common experience, and also address serious contradictions between some traditional Christian beliefs. The outcome of these reflections is a faith that I find  I can live by, and which I think is of great personal & social value. Some of the ideas I present on Credible Christianity and Apologetics are controversial, and I welcome your considered comments. An opportunity to offer comments is provided underneath each article I have published on my website.’

From the official website of Boston University, as part of conference information (organized in 2007: ‘Behan McCullagh retired recently as associate professor and reader in philosophy, and is now an Honorary Associate in philosophy at La Trobe University, Melbourne. His principal research interest has been the analysis of historical knowledge and understanding. This has involved studying theories of action, rationality, causation, objectivity, realism, symbols and metaphors, narrative and interpretation.  Recently he has started investigating the value of historical knowledge. He has also published occasional papers in theology and philosophy of religion. McCullagh’s books include Justifying Historical Descriptions (Cambridge University Press, 1984); The Truth of History (Routledge, 1998); and The Logic of History (Routledge, 2004). He has published extensively in History and Theory as well as in other journals including Mind, The Monist, Social Science Information, Clio, Philosophy of the Social Sciences and Theology. McCullagh graduated B.A. (Hons.) from Sydney University in 1958, and M.A., Ph.D. from Cambridge in 1965. His history tutor and director of studies at Clare College was Sir Geoffrey Elton, and his Ph.D. was supervised by Sir Herbert Butterfield. After graduating, he was a lecturer in history at the University of Melbourne for several years before joining the philosophy department at La Trobe University to teach and research in philosophy of history.’ 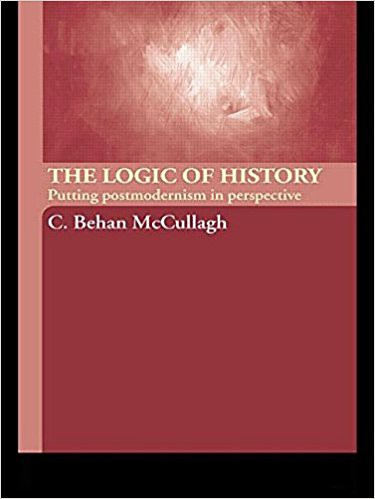