‘The increasing reliance of publishers on the American market is fostering a wave of political correctness, conservative academics claimed yesterday after Oxford University Press rejected a commissioned study for taking a traditionalist view of history.

John Vincent, Professor of History at Bristol University, had made several changes to accommodate criticisms of his survey of the development of the subject. However, the book, on which he had worked for more than two years, was deemed last month  “not suitable for publication”.

Professor Vincent, whose traditionalist stance has made him a controversial figure in academic circles, said the rejection was a “high-quality knifing”. He placed the blame on an anonymous “reader” who assessed his work for Oxford University Press. Among the reader's complaints were that he had omitted the contribution of women as historians. A four-page report also said: “Current historical writing attempts to use inclusive language: people not men, the historian not solely as ‘he’.”

The reader described Professor Vincent's criticism of many modern historians as a “rather sad and bitter diatribe”. The manuscript was said to display a “general absence of the appreciation of the project of social history”. OUP told Professor Vincent that his amendments had failed to satisfy the original criticisms of his book's approach. A spokesman said the book, designed for students in Britain and America, did not fit the narrow criteria set for it.

Other academics with traditionalist views said yesterday that political correctness was a growing problem. Professor Anthony O'Hear, of Bradford University, a government adviser on education, said: “It is the American market that is the big bugbear. I have had no difficulties myself but one hears of a lot of examples of this kind of thing.”

Chris McGovern, a fierce critic of the modern approach to history said: “this doesn't surprise me: it is a familiar story nowadays. John Vincent is a leading historian but you have to think in a certain way to be acceptable.”’

‘History has always been the most vulnerable discipline, abused by nations to justify wars and condone aggression. Totalitarian societies have traditionally rewritten the past to obliterate the presumed dissent of those whose example could rally opposition. Democratic societies have a better record of protecting impartial analysis and learning from past errors and crimes. Only an ideology as malign as Communism or Nazism demands the falsification of history, Western societies have assumed. They are wrong. Intolerance is ever waiting to ambush the past - even at Oxford, as the case of Professor John Vincent illustrates so alarmingly.

Professor Vincent is a distinguished historian at Bristol University. He is also a leading thinker on the political Right, who in 1986 was forced to take a year’s absence from his teaching after left-wing demonstrators disrupted his lectures. In 1992 he was commissioned to write a survey on the development of history as a discipline. But after an apparent tiff over early drafts of the text with the publishers, Oxford University Press, the project was suddenly dropped. Mr Vincent’s crime, it seems, was that he would not rewrite history to conform to the ideology of the times. His book was not written in the “inclusive” language that is gender neutral; he had not taken into account the modern principles that feminist historians have brought to the subject; and he had failed to appreciate the importance of social history - an interpretation dear to all Marxist hearts. In short, he was a right-wing chauvinist, insensitive to the new politically correct culture.

If this case had blown up at a liberal arts college in California three years ago, British academics would have given a bemused shrug. Oxford, it has been assumed, is impregnable to the assaults of fad and foible. Yet political correctness is a force all the more insidious because it pretends to liberalism and tolerance: the greater inclusion of women, the acknowledgement of the worth and achievement of minorities and other races, the refusal to condemn.

Last year there were attempts to turn the D-Day commemorations into some Euro-friendly festival of reconciliation. Last week the Smithsonian Institution in Washington was finally rebuffed in its proposal to mount an exhibition of the bombing of Hiroshima which portrayed the Japanese as the war’s victims and the Americans as ruthless aggressors - even quartering the estimate of American casualties in an invasion of Japan to make the bombing appear all the more gratuitous. All such revisionism is pernicious. But extension to historiography widens the boundaries of the new intolerance. OUP, and its university governing body, must not conspire in this new vandalism.’ 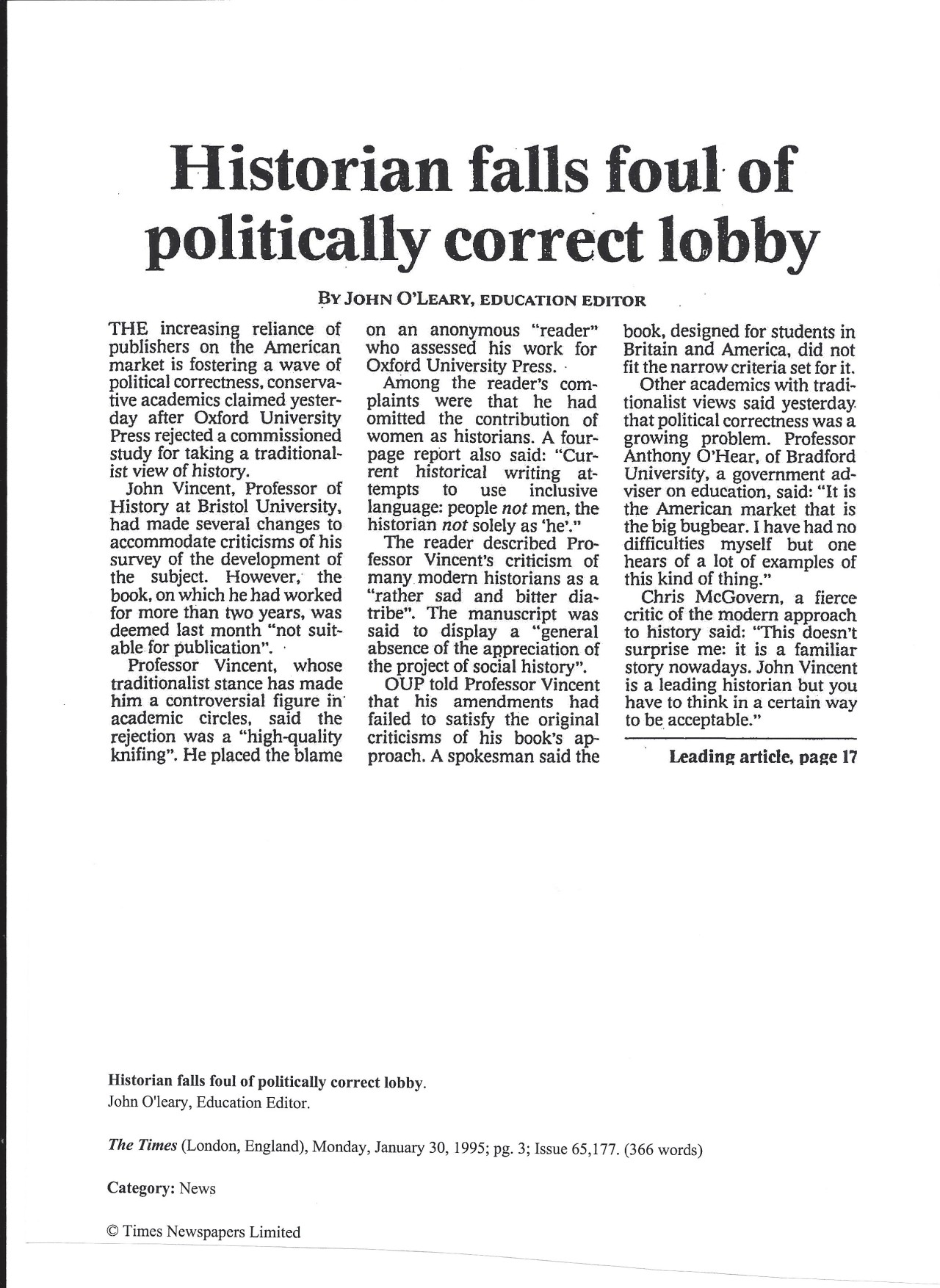 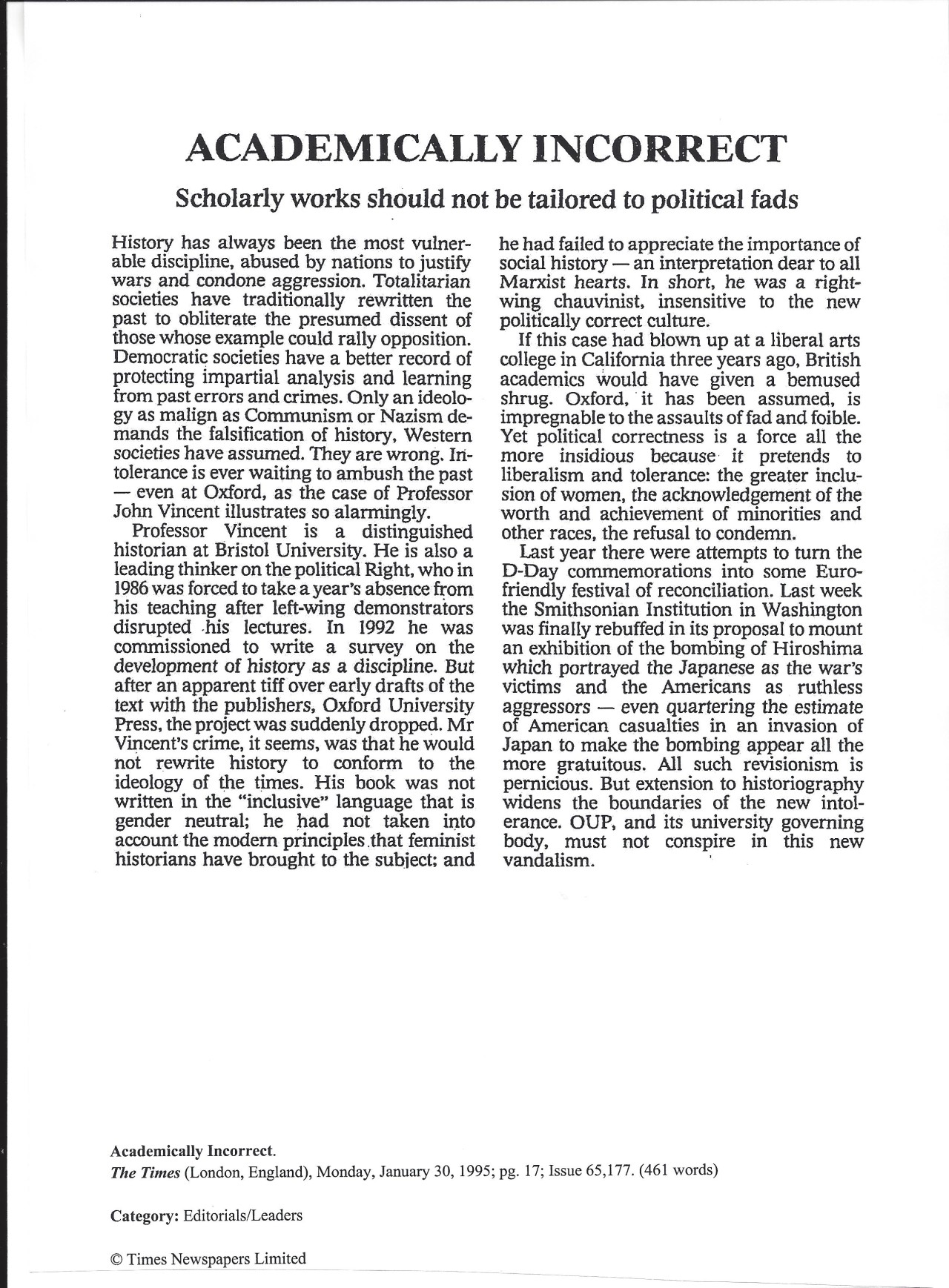