The Post-Truth Era: Dishonesty and Deception in Contemporary Life 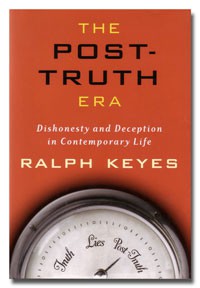 'At one time we had truth and lies. Now we have truth, lies, and statements that may not be true but we consider too benign to call false. Euphemisms abound. We’re “economical with the truth,” we “sweeten it,” or tell “the truth improved.” The term deceive gives way to spin.  At worst we admit to “misspeaking,” or “exercising poor judgment.”  Nor do we want to accuse others of lying.  We say they’re in denial.  A liar is “ethically challenged,” someone for whom “the truth is temporarily unavailable.”

This is post-truth. In the post-truth era, borders blur between truth and lies, honesty and dishonesty, fiction and nonfiction. Deceiving others becomes a challenge, a game, and ultimately a habit. Research suggests that the average American tells lies on a daily basis. These fibs run the gamut from “I like sushi,” to “I love you.”

As the volume of strangers and acquaintances in our lives rises, so do opportunities to improve on the truth. The result is a widespread sense that much of what we’re told can’t be trusted. From potential mates to prospective employees, we’re no longer sure whom exactly we’re dealing with. Deception has become a routine part of the mating dance. Personnel officers take for granted that the resumes they read are padded. No wonder private investigation is a growth sector of the economy.

What motivates the casual dishonesty that’s become pandemic?  Why do so many, even those with no apparent need to do so, feel a need to embellish their personal history? This question arises every time prominent figures are unmasked as fabulists: businesspeople, politicians, journalists, judges, military officers, police chiefs, beauty queens, newspaper reporters, South Carolina’s governor, the head of the United States Olympic Committee, and the manager of the Toronto Blue Jays.  Branches are grafted onto their family trees. Unearned degrees show up on their resumes. Purchased medals appear in their display cases. Thousands of non-veterans say they fought in Vietnam. Scores more passed themselves off as Ground Zero rescue workers.

We can only understand the motives of such dissemblers by examining the sea in which they swim. Trends ranging from the postmodern disdain for “truth” to therapeutic non-judgment encourage deception. There is much incentive and little penalty for improving the “narrative” of one’s life. The increasing influence of therapists, entertainers, politicians, academics, and lawyers, with their flexible code of ethics, contribute to the post-truth era. So do ethical relativism, Boomer narcissism, the decline of community, and rise of the Internet.

Post-truthfulness builds a fragile social edifice based on wariness. It erodes the foundation of trust that underlies any healthy civilization. When enough of us peddle fantasy as fact, society loses its grounding in reality.  Society would crumble altogether if we assumed others were as likely to dissemble as tell the truth. We are perilously close to that point.'

The quotation is  taken from Ralph Keyes' official website. It was retrieved on 2 December 2016. 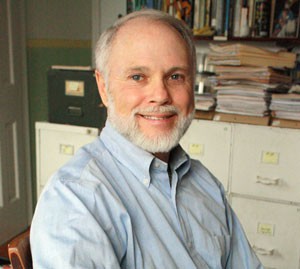