Art of the lie

Politicians have always lied. Does it matter if they leave the truth behind entirely? 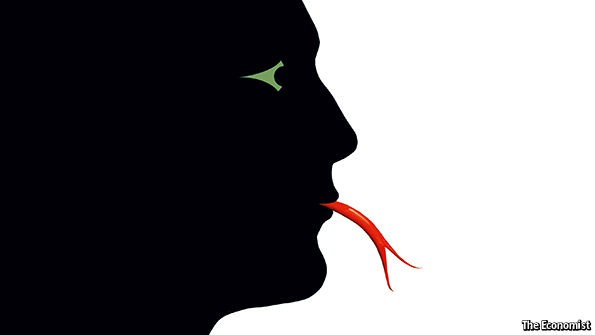 'Consider how far Donald Trump is estranged from fact. He inhabits a fantastical realm where Barack Obama’s birth certificate was faked, the president founded Islamic State (IS), the Clintons are killers and the father of a rival was with Lee Harvey Oswald before he shot John F. Kennedy.

Mr Trump is the leading exponent of “post-truth” politics—a reliance on assertions that “feel true” but have no basis in fact. His brazenness is not punished, but taken as evidence of his willingness to stand up to elite power. And he is not alone. Members of Poland’s government assert that a previous president, who died in a plane crash, was assassinated by Russia. Turkish politicians claim the perpetrators of the recent bungled coup were acting on orders issued by the CIA. The successful campaign for Britain to leave the European Union warned of the hordes of immigrants that would result from Turkey’s imminent accession to the union.

If, like this newspaper, you believe that politics should be based on evidence, this is worrying. Strong democracies can draw on inbuilt defences against post-truth. Authoritarian countries are more vulnerable.

Lord of the lies

That politicians sometimes peddle lies is not news: think of Ronald Reagan’s fib that his administration had not traded weapons with Iran in order to secure the release of hostages and to fund the efforts of rebels in Nicaragua. Dictators and democrats seeking to deflect blame for their own incompetence have always manipulated the truth; sore losers have always accused the other lot of lying.

But post-truth politics is more than just an invention of whingeing elites who have been outflanked. The term picks out the heart of what is new: that truth is not falsified, or contested, but of secondary importance. Once, the purpose of political lying was to create a false view of the world. The lies of men like Mr Trump do not work like that. They are not intended to convince the elites, whom their target voters neither trust nor like, but to reinforce prejudices.

Feelings, not facts, are what matter in this sort of campaigning. Their opponents’ disbelief validates the us-versus-them mindset that outsider candidates thrive on. And if your opponents focus on trying to show your facts are wrong, they have to fight on the ground you have chosen. The more Remain campaigners attacked the Leave campaign’s exaggerated claim that EU membership cost Britain £350m ($468m) a week, the longer they kept the magnitude of those costs in the spotlight.

Post-truth politics has many parents. Some are noble. The questioning of institutions and received wisdom is a democratic virtue. A sceptical lack of deference towards leaders is the first step to reform. The collapse of communism was hastened because brave people were prepared to challenge the official propaganda.

But corrosive forces are also at play. One is anger. Many voters feel let down and left behind, while the elites who are in charge have thrived. They are scornful of the self-serving technocrats who said that the euro would improve their lives and that Saddam Hussein had weapons of mass destruction. Popular trust in expert opinion and established institutions has tumbled across Western democracies.

Post-truth has also been abetted by the evolution of the media. The fragmentation of news sources has created an atomised world in which lies, rumour and gossip spread with alarming speed. Lies that are widely shared online within a network, whose members trust each other more than they trust any mainstream-media source, can quickly take on the appearance of truth. Presented with evidence that contradicts a belief that is dearly held, people have a tendency to ditch the facts first. Well-intentioned journalistic practices bear blame too. The pursuit of “fairness” in reporting often creates phoney balance at the expense of truth. NASA scientist says Mars is probably uninhabited; Professor Snooks says it is teeming with aliens. It’s really a matter of opinion.

When politics is like pro-wrestling, society pays the cost. Mr Trump’s insistence that Mr Obama founded IS precludes a serious debate over how to deal with violent extremists. Policy is complicated, yet post-truth politics damns complexity as the sleight of hand experts use to bamboozle everyone else. Hence Hillary Clinton’s proposals on paid parental leave go unexamined and the case for trade liberalisation is drowned out by “common sense” demands for protection.

It is tempting to think that, when policies sold on dodgy prospectuses start to fail, lied-to supporters might see the error of their ways. The worst part of post-truth politics, though, is that this self-correction cannot be relied on. When lies make the political system dysfunctional, its poor results can feed the alienation and lack of trust in institutions that make the post-truth play possible in the first place.

Pro-truthers stand and be counted

To counter this, mainstream politicians need to find a language of rebuttal (being called “pro-truth” might be a start). Humility and the acknowledgment of past hubris would help. The truth has powerful forces on its side. Any politician who makes contradictory promises to different audiences will soon be exposed on Facebook or YouTube. If an official lies about attending a particular meeting or seeking a campaign donation, a trail of e-mails may catch him out.

Democracies have institutions to help, too. Independent legal systems have mechanisms to establish truth (indeed, Melania Trump has turned to the law to seek redress for lies about her past). So, in their way, do the independent bodies created to inform policy—especially those that draw on science.

If Mr Trump loses in November, post-truth will seem less menacing, though he has been too successful for it to go away. The deeper worry is for countries like Russia and Turkey, where autocrats use the techniques of post-truth to silence opponents. Cast adrift on an ocean of lies, the people there will have nothing to cling to. For them the novelty of post-truth may lead back to old-fashioned oppression.' 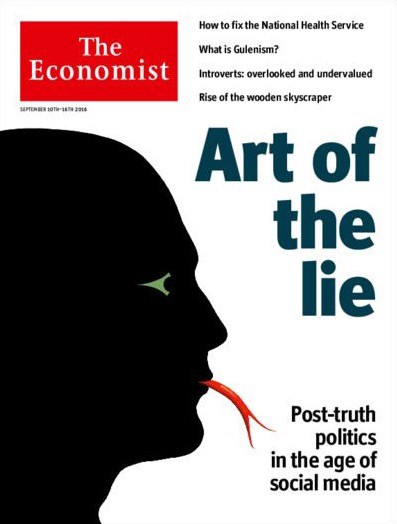